Matthew 13:3-8 “Then he (Jesus) told them many things in parables, saying: “A farmer went out to sow his seed. As he was scattering the seed, some fell along the path, and the birds came and ate it up. Some fell on rocky places, where it did not have much soil. It sprang up quickly, because the soil was shallow. But when the sun came up, the plants were scorched, and they withered because they had no root. Other seed fell among thorns, which grew up and choked the plants. Still other seed fell on good soil, where it produced a crop—a hundred, sixty or thirty times what was sown.”

We have lived in our current home for four years now. I’m sure I annoy more than a few of my neighbors because I refuse to use chemicals on my lawn. Here’s why:

Dr. (Anthony) Samsel is a research scientist who is passionate about farming, gardening, and agriculture, making him particularly suitable for investigating glyphosate. “I was with the ‘think tank,’ Arthur D. Little (ADL) in Cambridge, Massachusetts for many years working as a research scientist on many types of projects, from product development to environmental sciences to later switching to health sciences,” he says.

What he has learned:

Glyphosate, the active ingredient in Monsanto’s best-selling herbicide Roundup, is one of the most commonly used herbicides in the world. An estimated one billion pounds a year is sprayed on our food crops, resulting in the average American eating several hundred pounds of glyphosate-contaminated food every year.

Monsanto Has Known for Nearly 35 Years That GMOs Promote Cancer

Monsanto’s own research also supports the WHO’s International Agency for Research on Cancer (IARC) determination that glyphosate is a Class 2 A “probable human carcinogen.”–a determination Monsanto is now trying to get retracted….

So how did Monsanto and Biodynamics—the company doing the research—hide these inconvenient facts? According to Dr. Samsel, they cancelled out the controls and the damning findings by using historical control data from unrelated studies. It’s also worth noting that these negative findings were never published in the peer-reviewed literature or submitted to the EPA or the Food and Drug Administration (FDA). Cancer was clearly shown in their 26-month long feeding study….Monsanto knew in 1981 that glyphosate caused tumorigenic growth and carcinomas in multiple organs and tissues…

So, back to my yard. We have weeds. I do my best to keep the grass cut short so it isn’t too obvious. I also have a small raised-bed organic garden. Well, it’s as organic as it can be considering we are surrounded by neighbors who spray their lawns with chemicals. That’s why I’m moving to Auroville, India:

Seriously! It was the vision of Sri Aurobindo that came to fruition in the 1960s.

I imagined life in Auroville to be as close to perfect as anything this side of heaven. There’s probably no self-serving politicians, rabid neighbors, or drunken uncles. No cancer or heart disease or PMS, gluten intolerance, or out-of-control chocolate cravings, and they have no idea who the Kardashians are!

After all, if God had intended to use Auroville to test market a perfect world I doubt he would have used humans, especially greedy, self-absorbed, money-hungry humans who run multinational corporations like Monsanto to come in and mess it all up.

My bubble burst when I read about Monsanto’s disastrous corporate greed that has literally scorched the earth and destroyed thousands of lives in it’s wake in India (all over the world actually). You can read the article here.

Basically, Monsanto came in and made unattainable promises to hungry farmers and their families, who unwittingly signed on the dotted line. As a result, thousands of farmers and laborers have committed suicide because they lost everything as Monsanto became richer and richer.

The number of suicides by farmers and farm labourers increased five per cent at 12,360 in 2014.  Bankruptcy and indebtedness accounted for the major cause of suicides. More here.

No doubt Monsanto hopes the destruction they leave in the wake of their self-interest goes unnoticed by the rest of the world. It must be working because we happily spray their poisonous chemicals all over the earth.

I know what you’re thinking! “SO?  What does that have to do with me?” Stay with me.

Who would have thought Monsanto, the purveyor of everything deadly and toxic, would become a metaphor for a Scripture meditation? But, here we are. They not only destroy our soil, they are now irrefutably linked to diseases that are killing us. How many people are aware of that right now? Before their recent exposure in the media, were any of us fearful of the chemical content of these products? Obviously not, as they are a multi-billion dollar corporation set for a buy-out from Bayer.

Look at these two kids, just all giddy about their successes.

Can you see where I am going with this analogy? No? Okay. Follow my A.D.D. brain on this journey to the point I want to make about Matthews gospel.

We are the seed and the soil would be where we are planted, right?

I have some seeds that I start in small pots of organic soil. When they begin to grow into seedlings I repot them or move them into my garden which is also filled with rich organic soil. (Don’t be too impressed – I actually suck at gardening. Most of my plants start out beautifully but fail to thrive for one reason or another.

Because we were created in God’s image we start out perfect.  But, sometimes things go terribly wrong. We can be “repotted”, if you will, into dysfunctional families where we fail to thrive, as was my case. Fortunately, God reclaimed me and did his best to “repot” me into the soil of his divine love and mercy. I began to thrive again, striving for perfection, reaching toward the Light.

But often I allowed the world around me to convince me that what I had wasn’t enough; that I wasn’t enough. I needed more: worldly pursuits, obsessions, longings for things other than God, selfishness. Like unsuspecting plants sprayed with Roundup, my soul was dying little by little.

We have been called to be watchful of the often subtle and insidious destruction the world can inflict on us. Like corporations that skillfully market their products, the world markets an exciting and fulfilling life, “You deserve this new car, this great job, this man of your dreams.” Never mind the cost: the car you can’t afford, the job that will take you away from your family, the man who happens to be married –oops. And, to the extreme, in the case in India: death and destruction.

What is our foundation? Is it God in which we live and breathe and have our being? Or is it worldly pursuits and obsessions in which we give away all that we are; all that we were created to be?

John 10:10 tells us, “The thief comes only to steal and kill and destroy. I came that they may have life and have it abundantly.” And you can be sure that thief is cunning and resourceful. He knows our weaknesses and vulnerabilities so we must always be on guard.

And, my friends, this is where we get real, as Christians, we have also been given the responsibility of helping to protect those seeds that God has created and planted among us. Are we helping or hindering God’s work among the most vulnerable? We are surrounded by such tremendous need and suffering. What are we doing to help relieve that suffering?

Think about this: Because of the unbearable suffering and death of the people of India, one man stands out as their David against the Goliath, Monsanto. His name is M. Prabhakara Rao. This is what he gave up to battle a Corporate Giant:

Tens of millions of dollars were within reach for M. Prabhakara Rao as he prepared in April 2015 to take his Indian cotton seed company public. The Indian businessman already had $54 million in initial funding from an American private equity investor. Rao had also locked in a long-term licensing agreement with Monsanto Co, the world’s largest seed company, for the technology used in genetically modified cotton seeds that made up the majority of his annual sales. 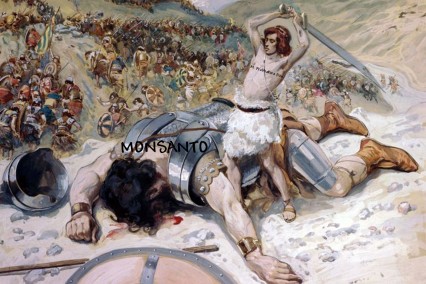 Could you or I have walked away from such wealth to stand before a giant like Monsanto?

It’s something to ponder and pray about don’t you think?

Okay, we’re done here. I have to get busy finding a recipe for dandelion wine! I’m hoping if I give a bottle of it to all the neighbors for Christmas, they’ll forgive me!