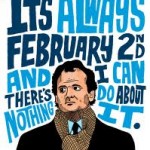 Let me say that God has done some pretty incredible things in my life! And there have been significant changes over the years. But there are still things that haunt me: Rejection, complaining and lack of true humility. Oh sure, I can lay claim to superficial humility. You know, that surface stuff that implodes the first time some jerk gets on my bad side!

And so, like our poor friend Phil here, I go to bed every night with good intentions and wake up the next morning finding myself stuck in the same place.

Remember in the movie, Groundhog Day, when Phil Connors (played by Bill Murray) says to Rita: “I have been stabbed, shot, poisoned, frozen, hung, electrocuted, and burned, and every morning I wake up without a scratch on me”? That would make a great metaphor for my life, and probably all our lives to one degree or another, except for the “without a scratch” part.

Here’s how my life has unfolded:

I was once a concept of God’s wild and magnificent imagination. I can envision all the angels in heaven dancing for joy at the sight of every single creature God brings to life.

Then, without warning, I was plopped into a broken world and life immediately began its re-creation of me into the person God no longer recognized. And the angels fell silent.

Through life I too (metaphorically) “have been stabbed, shot, poisoned, frozen, hung, electrocuted, and burned”. First by those who were entrusted with my care, and then by myself attempting to live within the context of that person who forgot who, and Whose, she was. Everything this Original Creation was supposed to be morphed into something unrecognizable. My focus was not to live with joy the fullness of the life promised to me. My focus became simply a matter of survival. Like Phil waking up every day in a world that never changed.

I tried to end my pain just like he did. Only I didn’t have a groundhog strapped to my steering wheel and it wasn’t on railroad tracks. It was me drunk in my little MG on the highway, praying that I would crash and die. Phil’s reaction when his attempt to kill himself failed was, “Ah, nuts.” Mine was the same. I think my exact words were, “Great! I’m even lousy at killing myself!” I remember getting out of bed the next morning and going off to work: Same empty life, different day.

Over the years, since that not so fatal day (thank you God!), much has happened. As I said before, God has done some remarkable things in my life considering my incessant resistance to the death of my own will. We have been through so much together! When I think about what He has managed to accomplish in this continual wrestling match it has been nothing short of a miracle! (Genesis 32:22-32)

After Phil described the torture he had endured he exclaimed that there was “not a scratch on me”. I couldn’t say that, but I did think that “not a scratch on me” meant symbolically that I tried to live as though the pain and suffering had no impact on my life. That I was just fine when I was far from it. I knew in light of the fact that God has brought my issues to light again, and not so subtly, that a lesson was coming…and it wouldn’t be pretty.

Sure enough, the last couple of weeks I have embarked on a new meditation that’s pretty AWESOME! It is titled Bridges to Contemplative Living, a compilation of the works of Thomas Merton and other Spiritual Giants. I know that God is ever so gently loosening my white-knuckled grip to my own self-will.

Of course, as is God’s mysterious way and because I have been in total denial, I have been whacked with almost daily admonitions from God of “Who do you think you’re kidding, Linda?”

For example: Within all of our relationships lies the truth of our faithfulness and sinfulness whether we want to acknowledge it or not. Every time we try to fool ourselves into thinking we’re destined for sainthood, if we’re not afraid to face that truth, there are powerful lessons to be learned.

So…I recently had a conversation with my husband. Okay, let me restate that. I had an angry confrontation with him concerning a family matter that I felt was going badly. I wasn’t angry with him, but wanted him to know how I felt about the situation. God sat quietly while I whined and wailed and wore myself out. And then ever so gently stepped in and stuck a big fat mirror in my face! That’s all it took. 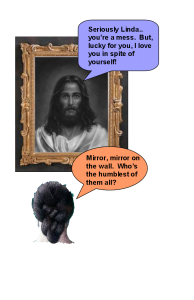 I had to sit with that and in the process I realized that my anger stemmed not from the current situation, but from many years of trying to defend my fragile ego and pride. It isn’t just with this particular person; it is with every person that pushes my ever so delicate buttons.

And I hear God say, “Okay, Linda. Let’s give it another try.” And so…I’m trying. What I would like to share with you is what God has been showing me in the process of the meditations, prayers, and almost daily experiences related to the study I am in the middle of that provide the litmus test of how I’m doing. Regardless of the fact that God has not cut me one bit of slack, I think it’s some pretty awesome stuff.

Some things have been subtle; some not so much as God tries to love me into the person He originally created me to be and He knows full well He has His work cut out for Him.

Have you ever felt rejected? I have, all my life. Even today there are people I feel rejected by and I react to them with unkindness. But how often have I considered the times I reject God by those thoughts and actions born of pride and cultivated in arrogance?

And, so I pray: Lord, I seek your forgiveness for putting so many things ahead of you. You love me SO much and feel my rejection so deeply. You cannot make me love you, though you love me unconditionally. Help me to sit in silence in your presence and teach me how to love. By your power and your grace, help me to let go of the things that fill my thoughts and keep me out of relationship with you and with those you bring into my life.

Another lesson reminded me how much I complain:

Mark 6:34 says, “When Jesus saw the vast crowd, his heart was moved with pity for them.”  Not so much the hearts of his disciples. All they did was complain. Jesus said to feed them. And their response? “What, are you kidding? There are thousands of them.” They counted the meager change in their pockets, “You can’t expect us to just call out for pizza. Let em’ get their own food!”

Jesus always manages to shine a spotlight on our smallness. In those moments I’m standing right there with the disciples all indignant about my weaknesses and inadequacies; forgetting the Source of my power that is within my very soul. He’s trying his best to get through to them, and me, and you. He even humbles himself for heaven’s sake! “I can’t do anything without my Father!” (John 5:30) But, do we listen?

And, the recurring theme throughout this study? Humility:

There is a whole bunch of humility going on here! John the Baptist never felt worthy “to tie Jesus’ sandals (Mark 1:7)”, and said before his followers, “I must decrease so Jesus can increase.”

How often are we willing to decrease so Jesus can increase? We are all called to love; to have faith and trust and hope; to be filled with joy, peace, and humility, which underlies it all. None of this is remotely possible if it is not born of a heart filled with awe and wonder at the magnificence, power, and glory of God. None if it!

And think of Jesus himself allowing John to baptize him. He wasn’t a sinner and didn’t need to be baptized. Yet he humbled himself before everyone and in the company of sinners to lead the way to his Father.

Reflecting on what I have been reading and studying was like a one-two punch. No, God doesn’t punch, but I’m telling you he flicks! I have been flicked often enough to know. And it hurts. Because he’s not flicking my head, he’s flicking my heart!

At one point in the movie, Groundhog Day, Phil says, “What would you do if you were stuck in one place and every day was exactly the same, and nothing that you did mattered?” Good question.

When we go our own way; when we obey the parts of God’s commands that are easy and discard the parts that don’t appeal to us: love your neighbor – check, love your enemy – scratch, is it any wonder that God hates that?

It’s funny, all that I have just related to you is nothing new. “HOLY COW, I never saw those verses before! I never knew God felt so strongly about THAT!” Liar! They have just been an inconvenient truth for me. They demand something I have not been willing to submit to. I pray that is all changing.

I’m sure God isn’t finished with me yet because I checked my pulse and I’m still alive!

I’d like to say that I have finally conquered this one but I know better, and I’m pretty sure there will be another lesson tomorrow…

and the day after that…

and the day after that!