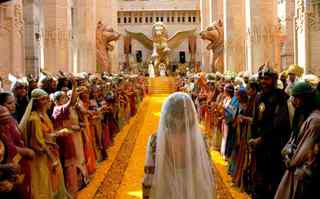 Esther was the joy of her cousin, Mordecai, who raised her. She was a beautiful Jewish girl who became the wife of King Ahasuerus, after he defrocked, dethroned, and de-vorced Queen Vashti, for refusing to obey him. Big mistake Love!

When the king went searching for a replacement, he chose the meek (not really, as we will see) and lovely Esther. In Esther’s day women were literally to be seen and not heard. No doubt she was reminded of Vashti’s fate as the crown was placed on her head. Even as Ahasuerus’ wife there was no exception to the rule everyone else had to follow. There would be no, “Hi honey how was your day?” conversations over tea. She was required to request an audience with him in advance, or risk death.

Everything was going well until one day Mordecai refused to bow to Haman who was elevated to the highest position under the king. Haman got a big head (men!) and required everyone to bow to him (except the king I suppose). In his wrath he became hell-bent on wiping out the entire Jewish population. And the king, albeit unwittingly, signed a death warrant for all Jews and made it official. (An important note here: Esther and her cousin failed to mention to the king that she was Jewish – oops.)

Mordecai sent a message to Esther hoping she would go to the king to save her people. She reminded him of the king’s decree that no one was permitted to approach him without advanced authorization. Doing so would surely result in her death. To which Mordecai replied, “…who knows whether you have come to the kingdom for such a time as this”? And her reply? (You gotta love it!) First, she asked everyone to fast and pray for three days. And then she said, matter-of-factly, “And so I will go to the king, which is against the law; and if I perish, I perish”! (4:15-16) Meek huh? Not so much!

Do you know what makes Esther’s story really incredible? There is no mention of God – anywhere! God came to Abraham in a vision, to Jacob in a dream, to Moses in a bush. There are countless “God sightings” in the Old Testament – but nothing for Esther, at least nothing visible. She had no idea if her story would end there. But that didn’t stop her. Do you know why? I would suggest to you that it is no different today for us. When was the last time you stood before a talking bush? I didn’t think so – me either.

I’m supposing Esther did, on a regular basis, what we should all be doing, she fasted and prayed. And from that simple devotion she had to know, deep down in her heart, that it was what she was “called” to do even though God remained mysteriously hidden.

I will tell you that God’s call to me to write my book was as clear as anything spoken to me. I would never have dreamt that up myself. Never! Most of the time His voice is not so audible though, but I still know. Deep down I know it is what I am supposed to be doing, and I know God is behind it.

And this is the point I am trying to get to. God has a plan for your life. A plan that goes far beyond what you could ever imagine. My book is full of God stories; of tentative “yeses” – waiting for more clarification “maybe’s” – and out-and-out Jonah sized, “No way’s”!

It’s those pesky “no’s” that stop God in His tracks. It’s too bad too because I often imagine I miss out on a lot of blessings and grace-filled moments when I sit on my fears. Then God says to me, “That’s fine Linda, I’ll get someone else to do it. But this is a gift I have given you since before you were born, and, guess what young lady? I am going ask you for an accounting when I see you.” Oops….

Keep in mind that “God does not call the equipped; he equips the called.”

If the world has told you that you are nothing special, I am telling you that’s a LIE! I don’t care what your life has been like. I don’t care how mundane your life is or how many times you have sinned and fallen short, God’s plan for you has not changed and never will! He will not take back your gifts, but he will be sorely disappointed if you waste them. Actually,more than disappointed, according to Gian Carlo Menotti:

Let me give you one short version of an example (the full version is in the book). I graduated from high school and was nine credit hours short of an Associate’s Degree (major point) when God came calling. “Guess what Linda? I am giving you an opportunity to go to graduate school for theology! Are you SO excited?!” Excited wasn’t the word I chose. It was more like, “Have you lost your mind”?! Here’s where I leave you in suspense…

But, let me say this in conclusion. Fear has no teeth when we put our trust in God – and I don’t mean when we know the outcome. Yet we function so poorly on trust alone! Instead, we dig in our heels and refuse to budge. If we don’t know for sure what’s happening around the corner, we just stay put! Fear denies us the fullness of life that God has promised.

So what are you waiting for?…

First and foremost, get on your knees and face your fears, because it’s from that place where God can do his mighty work in and through you. Then, look for workshops, conferences, or presentations that focus on discovering your gifts. Go back to church if you have drifted away. Get a mentor or join a prayer group or Bible study group.

Jeremiah 29:11 says, “For I know the plans I have for you,” declares the LORD, “plans to prosper you and not to harm you, plans to give you hope and a future.” As you lay this desire before God he will in turn give you what you need to fulfill His plans for your life.

Be prepared for awe and wonder like you could never have imagined! So, what the heck – if you perish, you perish! Come on, don’t let that stop you! Wouldn’t you rather go that way than be run over by a bus or dropped off a cliff?